The Hähnel Inspire Wireless LiveView Remote Control is as the name implies a Liveview remote control units that allows you to shoot stills or video remotely  from the camera up to 60 meters away. What you see on the screen is what your camera sees basically. – Does it work as advertised?

The Hähnel Inspire Wireless LiveView Remote Control was delivered in an non-inspiring box the same day as I was going on vacation and on where I needed the unit. Looking at the box I figured all cables were included so I packed the box and went on vacation.  The day after I found myself unboxing the unit in order to observe and capture flocks of Red deer.  After a quick study in the included manual I discovered there was no display cable included which meant there’s no way to use the remote Liveview. If you don’t bring your own video cable included with the camera you bought the unit is close to useless. – Certainly an odd design choice as most newer camera features a standard mini HDMI port that also bring your the best picture quality.

As you’re forced to use the standard composite cable in the The Hähnel Inspire Wireless LiveView Remote Control reciever you’ll end up, at least in Canon’s case, with a 1 meter cable that includes two composite sound plugs and a clumsy looking experience. 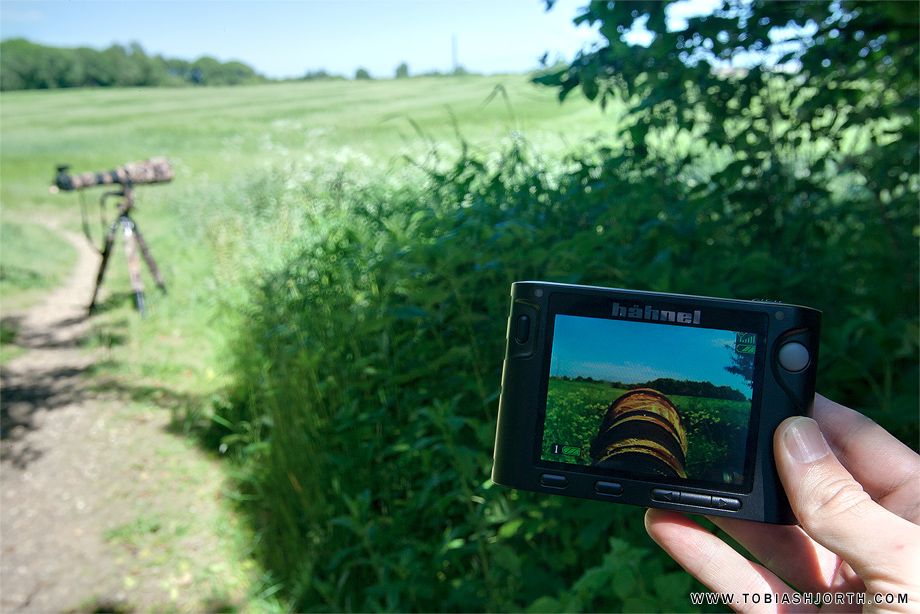 The Hähnel Inspire Wireless LiveView Remote Control features two Liveview modes. One from the built-in camera as seen above  that offers you a “surroundings” look and the other being true Liveview.
In first mode you’ll be able to see anything in front of the camera, in this case mostly the lens. The camera is rather low quality and despite this you’ re actually able to shoot with it as well. This is a surprisingly cool feature as the focal length probably differs from the lens you’ ve mounted on your camera body. It’ll offer you great situation awareness ex. for bird watching close to a nest, in situations where you need to know when you subject enters the frame or even on a surveillance type of situation.
The display shows battery status both on the receiver and the screen as well as number of shots taken and signal strength. Another excellent feature is you’re able to shot both modes without ever switching anything on your camera besides enabling Liveview.

As aforementioned the camera isn’t great in any way so don’t rely your main photographing on this mode. 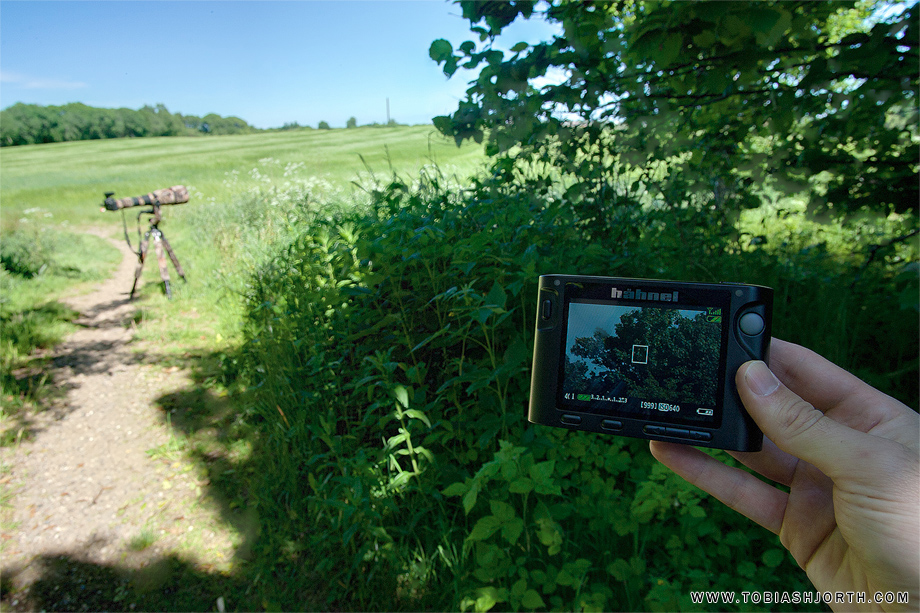 Similar to the other mode you’ll be able to capture what’s on the screen besides capture the frame on the camera. This means you have the option to take a screenshot of the screen that saves itself on the unit without the SLR camera shoots the still.
Besides that you have the option to let the DSLR capture the frame as using regular Liveview and this mode also support focusing before shooting, as the grey button on the right of the unit act just like the shutter button on your camera. The screen also reveals the same shooting information as the information found back of your camera. The shooting possibilities in this mode is close to endless as you basically have two feeds. The one on the camera and the one on the remote unit. Note the camera (The Canon 7D in the case) disables the screen on the camera as soon as you use the video out plug (Which it wouldn’t using HDMI).

Conclusion
The Hähnel Inspire Wireless LiveView Remote Control is a unique product. I found it to be annoying that it didn’t utilise the mini-HDMI plug found on most modern camera as you’re left using the substandard composite plug. With the being said the product works as advertised.

The range on this thing is amazing. Though trees, behind fields and small hills the unit still gave me a fully functioning Liveview. Perfect if you’re photographing extremely shy subjects. The screen is decent, despite the low resolution and the substandard composite plug. The brightness needs to be adjusted to make it visible on sunlight. Thankfully the unit does this as well.
The built-in small “situation” camera is actually quite useful if you’re using a larger focal length on the DSLR camera. You’re even able to capture what this camera sees.

In the end of the day the Hähnel Inspire Wireless LiveView Remote Control is a fun product that lacks in some departments and furfill the needs in others. With the low market price it’s a product I recommend you trying.