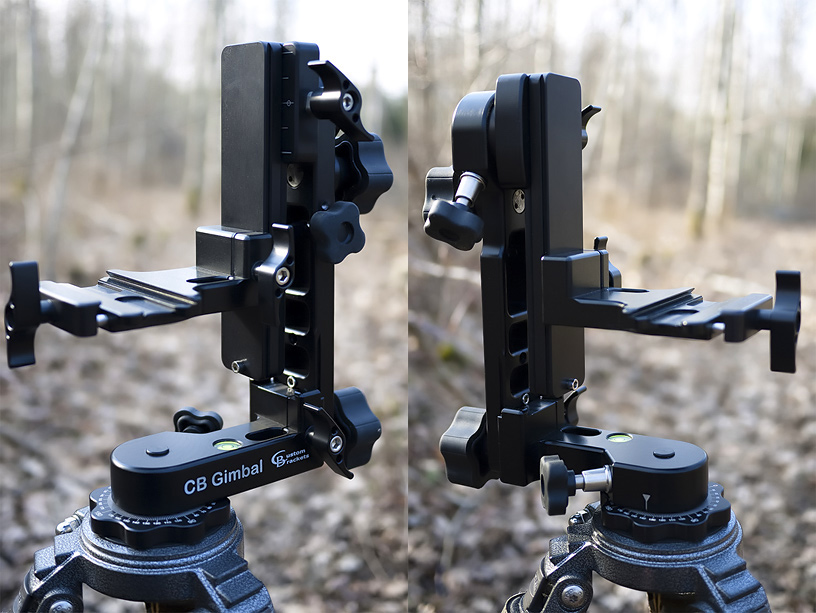 When working with heavy photographic equipment support is an issue. Working with big telephoto lenses the likes of the 500mm F4 or larger substantial support is crucial. If you make a movement with a 50mm lens the very same movement gets magnified 10 times with a 500mm lens.

Up until a few years ago there was pretty much one type of choice and it was the stable yet slow moving video head not suitable for tracking birds in flight. Excellent for still shots yet the opposite when photographing things in movement especially in still photography. Wimberley were among the first to release their legendary Wimberley Gimbal head and soon others followed improving and tweaking the way a perfect gimbal should work.

Custom Brackets is a company well known for their high-end flash brackets that, as the name implies, comes in highly customizable configurations for all sizes and shapes.
With that know how and overall craftsmanship Custom Brackets decided to enter the realm of gimbal heads adding, besides a new and unsurpassed ability to tweak tension on both axis, a surprising features to disassemble the entire gimbal head without using any tools. That alone is quite an achievement. 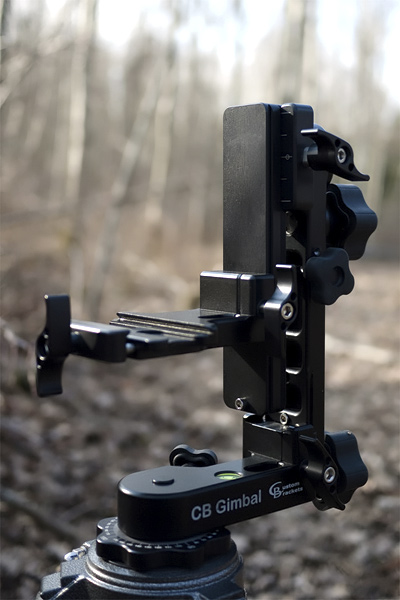 Going from top to bottom it is obvious, besides the well made separate parts, this head consist of a lot of knobs. Some rubberized and some made of aluminium. Either with high grade finish.

The base is very large and fits a 3 series Gitzo as a minimum. The head marked grade marked for extra precision. The first arm features 3 knobs. One for locking the vertical part to further assemble the gimbal. One, the big rubberized knob on the far right for locking or unlocking the panning movement. The third and smaller rubberized knob is for the unique panning drag feature. The further you turn it inwards the tighter the drag will become.
The panning is with the drags knob turned completely untightened, extreme smooth as shown in the video further down. Turn it slightly inwards and it will become slightly harder to turn and so on and so forth. Easily the most advanced and tweak able system. It is in fact adjustable for pretty much any type of telephoto lens. 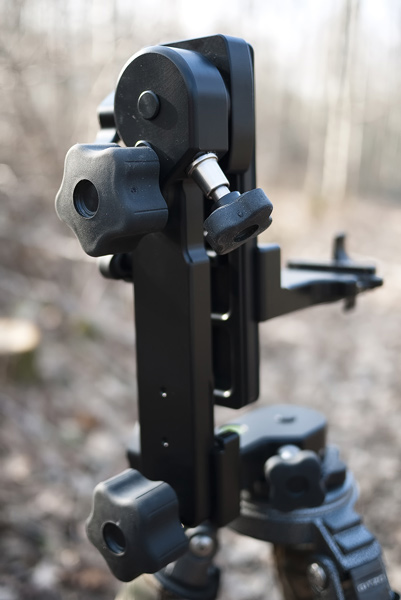 On the vertical bar the system features 4 knobs in total!
The biggest and rubberized for locking the swing similar to the one found in the bottom of the picture for the panning. Another knob seen in the first picture for the final part of the swing which binds the second piece to the third.
Also similar to the base is another drag knob also rubberized. And as with the base the thing work phenomenal. Untightened the tilt is extremely smooth perhaps overly smooth for some. Tighten it slightly and it will add just a hunch of drag. The more you tighten the knob the more it will add drag. It works as well as  it sounds.
The forth knob is a quick lock for the swing. Again made out of high grade aluminium its almost overly manufactured and if you haven´t guessed it Custom Brackets went all-in with this head. For a personal preference I wished it would be more of a snuggle and tight fit but you can´t have it all and it works as it should. 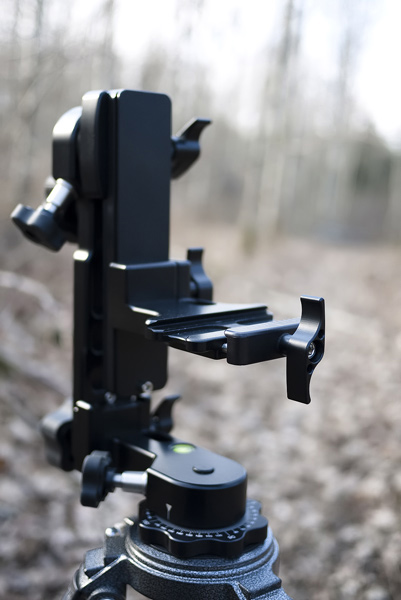 The two last parts completes the gimbal. It the third part of four is the vertical bar that holds the forth part. As with the rest of the head its manufactured without compromise. Custom Brackets could have done it with a solid flat bar but machined and rounded the aluminium to cut weight. It the bottom of the bar sits a small bolt acting as a stop for the quick release part.
The forth part and therefore the quick release part is similar to the one found on the Wimberley Mark II gimbal. It features two aluminium knobs. One for locking the forth unit and one for locking the quick release. Its very low weight is, again built without compromise and as a bonus low profile making if easy to mount lenses in the quick release. The quick release is thankfully based on the arca-swiss system which is in my option, by far the greatest on the market.
The Custom Brackets CB gimbal retails at $590 and given all the manufacturing its a fair price.

Conclusion
Easily one of the greatest and by far the most advanced gimbal on the market. The gimbal gathers admiration and curiosity wherever you use it and you´ll appreciate the ultra high end finish and manufacturing process Custom Brackets did to this head.
Besides the unique separate drag knobs the head features another unique thing being able to dissemble the head in four smaller pieces.
My only nit and personal opinion is that the base lock knob is placed at the same side as the knobs for the vertical control. While it has its advantages I prefer the base knob to be on the opposite side because it will otherwise dig into your shoulder or neck whenever you´re moving the rig from one location to another. – This type of knob placement is also shared by the Wimberley Mark II.
If you don´t mind that I can´t seem to come up with any reason why you shouldn’t pick up this head over any other on the market.